Would you like to switch to the accessible version of this site?

Don't need the accessible version of this site?

It's unfortunate, but millions of Americans will suffer from back pain at some time in their lives. And, if that's happening to you, your lifestyle is not what it should or could be. Perhaps your back condition is preventing you from doing simple things like putting on your shoes, holding your child or being a part of enjoyable family activities. Maybe it gets in the way of your work, your golf game, and your fitness activities. Maybe it even stops you from climbing a mountain-if that's your inclination. Your concern is my concern. My goal is to make you better without surgery, without injections and without drugs. Spinal Decompression Therapy is a revolutionary treatment that is safe and effective. FDA cleared equipment is used in treating conditions and injuries such as: herniated and bulging discs, facet syndromes, degenerative joint disease and sciatica. Not everyone is a candidate for Lumbar or Cervical Decompression Therapy, but those who do qualify will have a good chance to return to work sooner and have a chance to significantly improve their lifestyle. I encourage you to learn more about this breakthrough therapy.

Below is a list of disc terminology that you may find on a MRI report. This will help you understand your problem a little better.

to schedule your complimentary

to determine if this is right for you.


Over a lifetime the disc can be damaged by acute injuries like auto accidents and falls or by chronic smaller injuries like poor posture, weak and inflexible supporting muscles, and poor body mechanics. These injuries can cause the annulus, the outer layer of the disc, to tear. 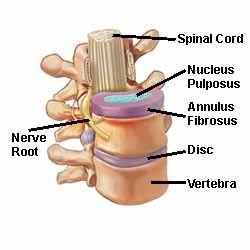 
A disc bulge is due to tears in the annulus allowing disc material to enlarge the disc in the form of a bulge; similar to the way an old tire might bulge out. Think of it as a slow leak. The nucleus (jelly like middle) of the disc "squirts" through some of the torn annular fibers, but not through all the fibers. This bulge may press straight back or to either side, depending on location of the annular tears. A bulge may or may not cause symptoms. 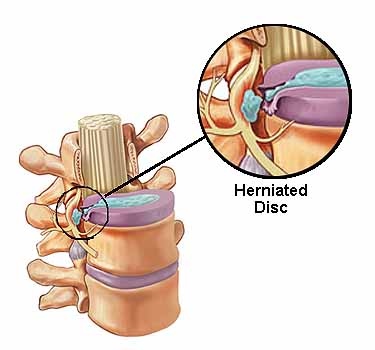 A disc herniation is a "localized displacement of disc material beyond the normal margins of the intervertebral disc space." "Herniated disc generally refers to displacement of disc tissues through a disruption in the anulus." "Herniated disc is sometimes referred to as "herniated nucleus pulposus," but the term herniated disc is preferred because displaced disc tissues often include cartilage, bone fragments, or annular tissues. The term "ruptured disc" is used synonymously with herniated disc, but is more colloquial and can be easily confused with violent, traumatic rupture of the annulus or end-plate." Think of a disc herniation as a tire blow-out. 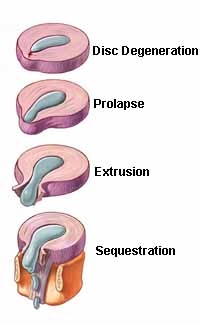 
A protruded disc is "a disc in which disc tissue beyond the disc space is contained within intact annulus." "A disc that has broken through the outer annulus at the apex, but maintains a broad continuity at the base, is protruded and uncontained. While sometimes used as a general term in the way herniation is defined here, the use of the term protrusion is best reserved for sub-categorization of herniations meeting the above criteria." The outer ring of the annulus has not been breached, in other words, no disc material has completely squirted through the outer edges of the disc.

An extruded disc , occurs when the annulus tears all the way through and some disc material actually pushes out beyond the boundaries of the disc and nearby ligaments, but has not broken away from the disc itself. "The preferred definition is consistent with the common language image of extrusion as an expulsion of material from a container through and beyond an aperture. Displacement beyond the outer annulus of disc material with any distance between its edges greater than the distance between the edges of the base distinguishes extrusion from protrusion. Extruded discs in which all continuity with the disc of origin is lost may be further characterized as sequestrated. Disc material displaced away from the site of extrusion may be characterized as migrated."

Finally, a sequestered or sequestrated disc "is an extruded disc in which a portion of the disc tissue is displaced beyond the outer annulus and maintains no connection by disc tissue with the disc of origin." It occurs when the herniated disc material completely separates from the disc and becomes a free fragment, which floats around, just like a loose piece of cartilage in the knee. "If even a tenuous connection by disc tissue remains between a displaced fragment and disc of origin, the disc is not sequestrated."

Send Us an Email Today!

Find us on the map

Find Out When We Are Open